BR – What are EBVs and how do they help?

In summary, quantitative genetics involves using statistics to calculate a number called an estimated breeding value (EBV).  This estimate is a number which ranks dogs in a population from best to worst for their likelihood of possessing the most desirable genes based on their own data and data of their relatives.

Here is a more detailed explanation.

Estimated breeding values (EBV) are statistical calculations which provide an estimate of the likelihood a particular dog has more of the desirable genes for a trait compared to other dogs in the dataset from which the EBV was calculated.

EBVs identify which young dogs have the highest estimates of genetic merit and are therefore the ones who should be the pool of dogs to be further screened by looking at the “whole dog” such as reproductive health and other traits so the best are kept for breeding. See the example below.

The actual EBV is a number from 1 to -1 as seen in the example below. Breeding managers most often use the Percent Ranking which is simply the order of the EBVs from best to worst. Dog 1 is ranked 99.7% for elbow dysplasia as compared with all other Elbow quality EBVs from the other Labrador Retrievers in the dataset.

How EBVs help
Genetic selection can be done in many ways. The most popular approach is phenotype selection but even the greatest force of changing gene frequency is mostly due to chance as genes from 2 parents are recombined into the resulting puppies. 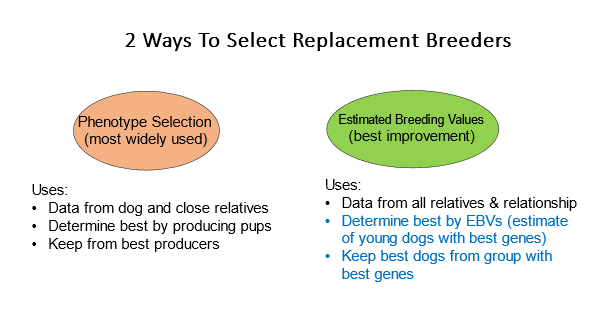 1. Studying phenotype data on many dogs under consideration including data on relatives.

a. Most data comes from searching on-line registries for health clearances, performance titles, speaking with others and observing dogs performing in shows or competition.
b. Unfortunately, not all relatives are represented and most often, only registries only report information on normal dogs.

3. Use of expansive genotype tests available from commercial laboratories to reduce incidence of genetic diseases.

a. Test results can be helpful, especially in choosing mates that prevent producing affected progeny
b. The downside is the overwhelming challenge of trying to effectively use the data to systematically increase the frequency of desired genes.
c. Many traits of concern for breeders are polygenic. Genetic tests for polygenic traits have not been developed and it is hard to see how they can be useful.

The most frustrating aspect of phenotype selection is that despite all of the cost and effort invested, breeders are still at the mercy of chance to systematically improve their dogs’ health, behavior, working ability and conformation simultaneously while maintaining genetic diversity in the population. With the ever-increasing number of genotypes being reported and other tools now available, even the most adept breeder studying the data of dogs and their relatives cannot adequately estimate the relative genetic value of the underlying genes and how they will interact across loci in the next generation.

Fortunately, there is a better method which uses statistical calculations, developed by scientists trained in quantitative genetics and statistics. By incorporating estimated breeding values (EBVs), breeders can know which young dogs are statistically more likely to possess more of the desired genes.

Next BR – How EBVs are calculated