BR – How EBVs are calculated

EBVs are calculated from special quantitative genetics software using data on the phenotypes of all relatives and their pedigree relationships. The data used in the calculation includes the trait of interest such as elbow dysplasia measure from all or most dogs and other measures that influence variation in the expression of the trait such as sex, scorer, age of dog when measured, etc.

These calculations do not require knowing the actual genes involved. However it is also possible to incorporate into the statistical calculations genomic data that identify specific genes or markers that underlie variation in quantitative traits. The complex mathematical calculations can be done for traits with a continuous range of values like height and weight and also for threshold traits which have discrete values such as severity of elbow dysplasia or even binary traits.

Quantitative traits are often polygenic meaning they are influenced by many and often a large number of genes, each having an effect. They are also affected by environmental influences. 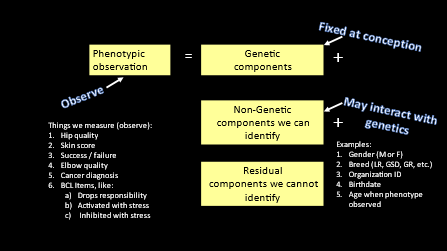 The steps are to:

1. Combine the data and pedigree relationships for all dogs that have measures for the trait of a particular breed or in some cases multiple breeds. IWDR ties all dogs together and provides structured data entry. Lots of data are needed. 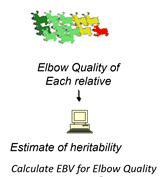 2. Estimate the heritability to determine if the trait is sufficiently heritable to respond to genetic selection.

Heritability (h2) is officially defined as the proportion of total variance observed in a trait that arises from genetic differences among animals. Variance measures the degree to which individual measurements depart from the population mean. In simpler terms, heritability is the proportion of the parental superiority over the population average that parents transmit to their offspring. Even more simply, it is the degree to which genes cause the phenotype that can be measured. Because it is a ratio of a part of something to all of something, it must be a number between 0 and 1. It can be estimated in several different ways, but to do the estimation correctly requires training. Most agricultural universities employ trained scientists known as animal breeders who possess this training. The higher the heritability, the greater and faster genetic selection can improve the trait.

Examples of heritability for IWDR data:

The genetic model which can be thought of as a list of variables that includes the phenotype and other information called ‘non-genetic components’ that can be identified. Non-genetic components are bits of data that have been tested statistically to influence the differences in the scores for the trait being studied. Examples may include sex, age that the phenotype was measured, organization where measurement was scored. The data are run on specialized software using the configuration of the genetic model and the estimate of heritability provided by the software.

3. Calculate the EBVs – Estimated Breeding Values can be calculated for traits with high enough estimates of heritability. EBVs need to recalculated regularly because new data, especially on the dog and close relatives, may change a dog’s ranking for better or worse. IWDR updates the EBVs every week.

Tags:
Previous BR – What are EBVs and how do they help?
Next BR – What is needed to calculate EBVs and EBV accuracy?