The goal of genetic selection is to keep new dogs for breeding who are genetically superior to the generation before. 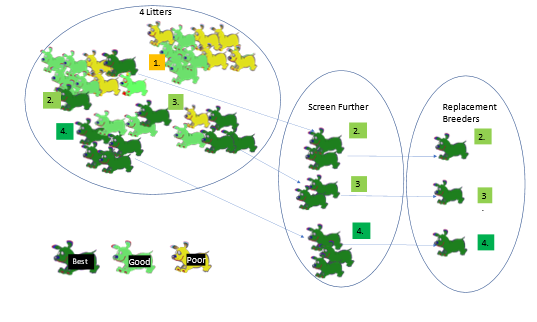 2. Further screen more individuals from each litter than the number of dogs that are eventually needed as replacement breeders. Follow best practices to screen for common diseases for the breed and use validated behavior assessments.

3. Keep the number of replacement breeders needed from best dogs from genetically diverse litters. Avoid the common mistake of keeping only the “perfect” dog. Instead, systematically improve the genetic quality of your dogs with each successive generation by keeping the genetically best from each generation and breed them to genetically superior mates.

In the example below, progeny Chandler was kept as a replacement breeder from study Viking and brood Emma. Although Emma’s was genetically less desirable, breeding her to a genetically superior stud, resulted in genetic improvement in the next generation. 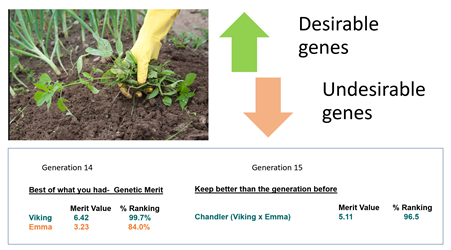 When practicing the 3 Principles of Genetic Selection, choosing the ideal mate includes ensuring the mate choice

a. Results in the lowest inbreeding coefficient among the resulting litter
b. Will genetically improve the target traits while keeping in mind that we are breeding for the whole dog

It is also important to use studs equally. It is very tempting to use “best” studs more for potential short-term benefits of higher success rates however this practice results in a rapid increase in inbreeding. 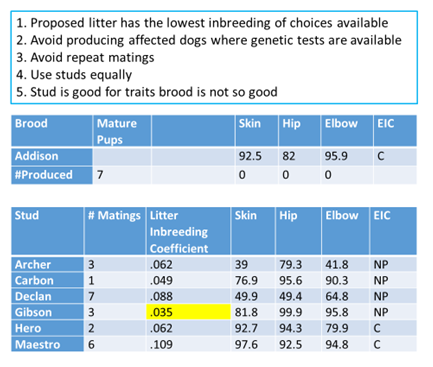 a. Limit the number of progeny any one individual produces
b. Use the genetically superior progeny as soon as possible, replacing the parent 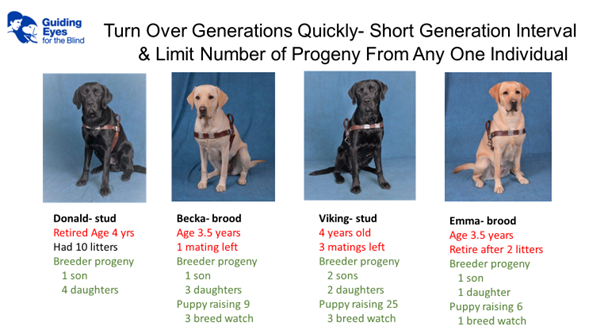 Avoid the common mistake of continuing to use your best proven stud over many generations. The motivation to do this if often comes from previous experience and/or concern that the next generation will be genetically inferior which creates the need to hold on “proven” breeders that have demonstrated their genetic superiority based on their progeny. Progeny testing has long been used however there is significant cost and lost time producing sufficient progeny, waiting for them to mature, collect and summarize production data. Estimated breeding values and a selection index enable breeding managers to know which young dogs are genetically superior BEFORE they have any puppies.

The flow chart summarizes the decision tree for selecting the genetically superior breeders: 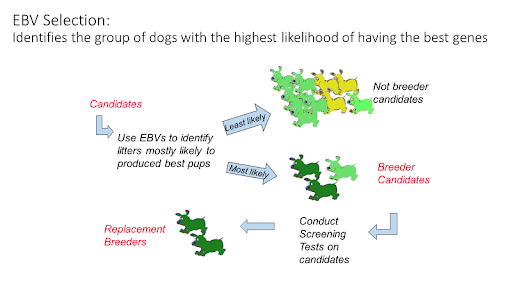